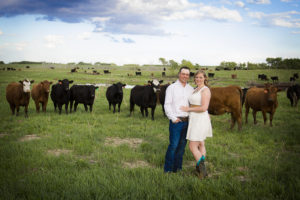 Aaron and Adrienne Ivey are passionate about the future of agriculture.  Along with their children Noelle, age 8, and Colton, age 6, they own and operate a mixed cattle and grain farm near Ituna, Sk in partnership with Aaron’s parents, Robert and Karen Ivey.

Aaron and Adrienne purchased their first land in 2000. They moved back to the farm shortly after completion of their agriculture degrees.  Aaron farmed full time, while Adrienne worked in the ag industry, managing a small outlet of a local independent ag retailer. After having their daughter, Noelle, in 2006, Adrienne worked as a sales rep for the forage and canola seed company, BrettYoung. After the arrival of their son, Colton, Adrienne began transitioning to working part time, first in BrettYoung’s marketing department, then as a Financial Solutions Manager for Blair’s Fertilizer. In 2013 they saw the growing needs of their family and farm and made the decision for Adrienne to use her professional experience to continue to grow their operation on a full time basis.

For the past 15 years Aaron and Adrienne focused on growing their family, building their cow herd, expanding their land base, and restructuring their operation. They now look to the future and focus on ways to improve their production and business bottom line. Variety trials, stockpile grazing demos, plant growth promoter side-by-sides and, most recently, a genomic trial are all ways they look to examine their current and research future practices. Bale grazing, extended weaning, sod seeding and genetic selection have all been areas of innovation and change.

While on-farm research is important, they strive to improve ag research on a provincial level as well. Aaron has been involved in a number of steering committees and projects to bring government and producer group funding and focus back to research for both beef and forage.

As they look to the future, Aaron and Adrienne are optimistic about continued opportunities in primary agriculture and are focused on continuing down the path they are on. 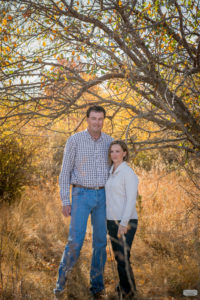 Ryan and Leanne live between Ceylon and Minton, in southern Saskatchewan where they operate Living Sky Beef Inc.  Ryan grew up in the beef industry being raised on a mixed farm near Carnduff, SK while Leanne was raised on a grain farm at Hearne, SK.  The two met when they both attended the University of Saskatchewan, graduating with Degrees in Agriculture. Both carried on at the U of S completing MSc. Degrees in the area of Animal Science. Following University, Ryan and Leanne moved to Lethbridge, AB in 2002 where Ryan worked as a feedlot consultant for Cargill Animal Nutrition and Leanne worked at Agriculture Canada as a research assistant. Yearning to get back to Saskatchewan, the pair moved to Ceylon when the opportunity arose for Ryan to manage Border Line Feeders, a 7,000 head feedlot that was just beginning operation in 2005.  During his 6 years managing the feedlot, it grew to a 12,000 head, very successful facility and was nominated for ABEX awards in six consecutive years, winning the ABEX for investment in 2006 and the award for Community Involvement in 2010. During this time, Leanne began working as a consultant, managing projects and doing communications work for a variety of Agricultural organizations including the Saskatchewan Forage Council. In addition to their day jobs, Ryan and Leanne began feeding cattle in 2008. In 2010, they purchased land near Minton, SK and in 2011 Ryan left his job at the feedlot to manage their own business – Living Sky Beef. This operation incorporates beef and forage management and includes cow/calf, backgrounding, and finishing of cattle as the market dictates.

Ryan and Leanne both strongly believe that producers need to be involved in the direction and policy development that shapes their industry. More than just a belief, Ryan has demonstrated his dedication to the beef industry through involvement in various boards and initiatives including, director for the Saskatchewan Cattle Feeders Association (SCFA), director for the Saskatchewan Cattlemen’s Association (SCA), SK director for National Cattle Feeders Association, advisory committee for the University of Saskatchewan’s Beef Cattle Research and Teaching Unit and member of the Youth Economic Engagement Council of Enterprise Saskatchewan. Leanne’s work with agricultural organizations have seen her involved in a number of committees and boards as well including Saskatchewan Beef & Forage Symposium, Saskatchewan Pasture School, Saskatchewan Beef Industry Conference, Native Prairie Reclamation Restoration Workshop, Canadian Forage and Grassland Association board member, SK Advisory Council on Forage Crops and Western Canadian Feedlot Management School.

Leanne and Ryan welcomed Samuel into their family in 2010 and Rachel in 2013. They look forward to raising their children in rural Saskatchewan, teaching them the importance of community involvement and the role of stewardship in Agriculture. Samuel is already showing an interest in the beef industry as he rarely passes up an opportunity to help check cows or ride in the tractor!