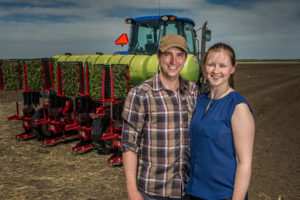 Daniel and Chelsea Erlandson, along with their two children, live and farm 30km North of Outlook, Saskatchewan. They are majority owners in Spring Creek Garden Ltd. Daniel and Chelsea are the third generation owners of Spring Creek. Daniel took over the farm fourteen years ago at the age of sixteen and married Chelsea in 2010, who became an integral member of the farming operation. In 2015, Daniel’s brother Travis and his wife Jackie joined the company as Shareholder partners.

Spring Creek Garden grows over fifty different varieties of vegetables and attends eight farmers’ markets weekly, six in Saskatoon and two in Regina. The main goal is to provide a consistent supply of a wide variety of fresh vegetables. The farmers’ markets is where Dan originally began the business. Starting with just a few markets a week and quickly adding as many as he could to maximize profits in the short season. It wasn’t until 2010 when Chelsea began helping that the Regina markets were added and life became even busier. Dan and Chelsea both understand and realize that the market season, mid-June until mid-October, is short in length, but possibilities are endless.

Spring Creek Garden grows, packs, and markets 150 acres of vegetables for the wholesale market. The main vegetable crops grown are romaine, celery, broccoli, leaf lettuce, brussels’ sprouts, and sweet corn. These vegetables are sold through Federated CO-OP in Saskatchewan, Alberta, and Manitoba. Spring Creek markets to CO-OP through a newly formed corporation, The Prairie Fresh Food Corporation (PFFC). PFFC is made up of seventeen Saskatchewan vegetable growers that work together to provide a wide array of products. The vision of the PFFC is to provide high quality Saskatchewan produced vegetables as well as focus on growing the vegetable industry in Saskatchewan.

Late in 2014, Chelsea was voted in as Secretary/Treasurer of the Saskatchewan Vegetables Growers’ Association. This position enables Chelsea to work with like-minded vegetable producers, as well as knowledgeable specialists who work for the University and the Ministry of Agriculture. The desire is to learn about the industry and to aide in growing the vegetable industry to make further successes. 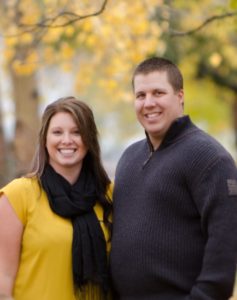 Andrew and Laura VanderKooi were both born and raised in Chilliwack, BC. Andrew grew up on the family dairy farm milking 450 cows in a rotary style parlour, while Laura was raised in town with a love for animals and the outdoors. They were married in 2007 and made the decision to work off the family farm shortly after. Andrew started long haul trucking while Laura began selling river boats in town. By 2010, not completely satisfied with their current careers, they came to realize farming was the future they wanted for their family. They found a dairy farm located one mile west of Dalmeny. In April 2011, with the help of Andrew’s parents, they moved their family from BC and began their farming careers.

Andrew and Laura welcomed their first son, Ty, into their family in 2010 and their second son, Wyatt, in 2013. They value the opportunity to raise their children in a farming atmosphere and they would like for their boys to continue to develop the work ethic that comes with farming, as well as grow their love for animals and the land.

In April 2015, Andrew and Laura officially became the sole owners of their farm. They purchased the dairy from Andrew’s parents and began running as their own entity, Legend Dairy Ltd. Currently, they milk 200 Holstein cows, three times a day. They raise their own young stock, bringing the total number of head on the yard to 430. They utilize 935 owned acres and 500 additional rented acres to grow their own corn, barley, alfalfa, peas and oats, becoming as self-sufficient as possible.